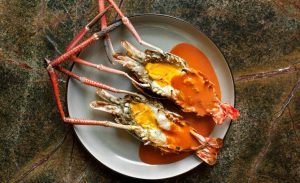 Bangkok (Thailand) – July 10, 2019 (travelindex) – The House on Sathorn today announced the opening of Paii, heralding a new chapter in the culinary offering of the historic, 130-year old landmark. Taking its name from the Thai word ‘Paii’ (พาย), which means to paddle, the new restaurant presents the best of local and imported seafood while honoring the legacy of the founder of The House on Sathorn, Luang Sathorn Rajayutka, who created Sathorn Canal.

With a home inside one of Bangkok’s most recognizable food and drinks venues, Paii Executive Chef Joe Weeraket presents a menu bursting with flavor. Highlights include the local Giant River Prawn, char-grilled and served with “choo chee” curry sauce; the French Razor Clams, flambéed table-side with house-made XO sauce; and the French Turbot, stuffed with lemongrass, shallots, and kaffir lime leaves and baked in a thick Thai herb salt crust. Diners will not want to miss the Giant Crab Fried Rice, made with organic jasmine rice from Nakhon Pathom. The plate is designed for sharing and topped with no less than half a kilo of freshly steamed Surat Thani mud crab meat.

The House on Sathorn opened in 2015 after an extensive renovation carried out by Thailand’s Fine Arts Department. The interior design of Paii retains the opulence of its gilded past while modern elements, including contemporary Thai artwork such as tapestries, paintings, photography, and sculpture, come into play, injecting modern vibrancy into old-world glamour.

“We’re delighted to bring this new dining concept to The House on Sathorn,” said Ms. Tina Liu, General Manager, W Bangkok. “With its storied past and inclusion into W Hotel Bangkok, this striking heritage home is a unique juxtaposition of old and new, and the addition of Paii and its modern Thai seafood is the perfect culinary match.

” Paii offers indoor and outdoor dining and is open daily for lunch and dinner from 12 PM to 12 AM. The restaurant also features a bar for an enticing mix of crafted seasonal cocktails, cutting-edge sounds, and tempting bites.

Reviving a Landmark in the Heart of Bangkok
Built-in 1889 during the reign of King Rama V, The House’s neo-classical structure originally housed wealthy businessman Luang Sathorn Rajayutka, who created Sathorn Canal. The home was later was passed down to his descendents. In the early 1920s, the site was converted into the Majestic Hotel Royal. Later, from 1948 to 1999, the building served as the Russian Embassy.

Recognizing the immense historic value of the house, the development team worked closely with Thailand’s Fine Arts Department to carefully restore the home to its former glory, as part of the conversion to The House on Sathorn. Major renovations were conducted on the four buildings and large courtyard, keeping the original main structure intact.

Meanwhile, inside, the original color palette, intricate wooden staircases, and even the Sathorn Rajayutka family’s personalized fresco motifs have all been meticulously restored by the Fine Arts Department. The compelling juxtaposition of contemporary components and new elements reflect the boundless creativity of renowned design firm AvroKO of New York.

The House on Sathorn
Since opening in 2015, The House on Sathorn has taken place among the city’s most distinctive food and drink venues. And as to the building itself, what a place it is. The neo-classical structure dating from 1889 functioned first as a private residence, by the 1920s had become a hotel, then later from mid-century to 1999 served as the site of the Russian embassy.